OTs Doing it Differently: Dr Lynne Goodacre, Letting go of being in the room

HomeOTs Doing it Differently: Dr Lynne Goodacre, Letting go of being in the room 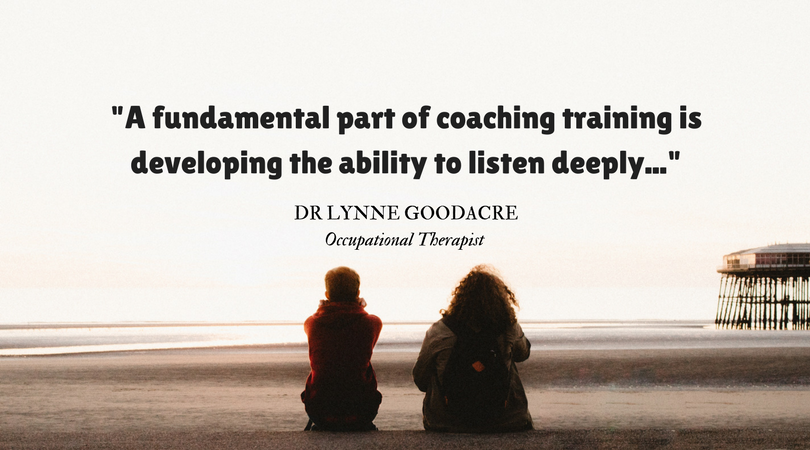 The inspiration for this post came from a comment Jen made in her last ezine when writing about her drives with her daughter:

She faces forward and we don’t need to make eye contact. This is really helpful in terms of freeing up our brains to do their own sorting and regulating and so helpful in coaching, which is why I enjoy telephone coaching so much.

This comment really resonated with me in terms of my coaching journey and my relationship with not being physically in the room with clients. The vast majority of my practice, on a one to one and group basis, was based on face to face interaction. It was how I worked, informed by a deep seated belief that I would miss so much if I wasn’t physically present.

My introductory training as a coach was also based on a series of highly interactive workshops. We met as a cohort in London and worked together intensively learning through a very experiential face to face approach. However, when I moved into my certification programme things changed dramatically. The programme was delivered on an international basis. We worked in ‘pods’ of 9 people with a pod leader. My pod leader was based on the West Coast of America and the other pod members were from around the world. We dialed in once a month for a two-hour session which involved a lot of coaching.  In between we split into triads for coaching calls during which we coached each other over the phone. My supervision was via Skype.

In a practical sense boy was this a steep learning curve. Working out time zones, downloading software, working out what would incur charges and what was free. Prior to this I hadn’t used my mobile for group calls so even simple things like how to use the mute button caused moments of concern, ‘will I cut myself off if I press this? If I do how do I get back into the call?’ I know, I know… some of you may be sighing at this point but this was my reality. It was an unknown entity which generated a degree of anxiety.

More importantly I remember distinctly the resistance I felt during my first few weeks of pod calls. I felt the need to voice my resistance to my pod mates, I remember telling my supervisor that once I had completed my certification I know that I don’t want to work like this.’ and I was convinced this way of working wasn’t for me. Where did this deep resistance come from? The truth is I’d never really questioned if things could be different, never really explored alternatives, I had developed a closed mind set.

A fundamental part of coaching training is developing the ability to listen deeply (something I have written about previously). Level 3 listening, the deepest form of listening, takes in not only the words being said but the energy between coach and client and how this may change, the emotions and shifts that occur during the coaching. It is an embodied form of listening. So my initial questions revolved around how it was possible to achieve level 3 listening on the phone?

By now perhaps you are picking up that I was incredibly skeptical about this. No, in fact not just skeptical pretty resistant if I’m honest. Rather than starting my early sessions with an open and curious mind,’ how can I make this work, what opportunities might this openup’, I dialed in feeling resistant and frustrated, ‘There is no way this is going to be as good as being in the room with the person’.

I was in need of some serious self-coaching and as I became more embedded into the programme I began to experience the power of phone based work: it is possible to listen deeply, to pick up changes in intonation, energy, emotion; you can actually feel the need to get up and move when energy builds; you know when to hold a silence; it is, in some ways, easier to focus on what is and isn’t being said.

As Jen pointed out there is something freeing about not always being in eye contact. The freedom for clients to launch things they may feel tentative about saying face to face.  As a coach I can make notes, write words, doodle, when a person is speaking without distracting them. This is not me switching off it is how I focus more. Even though we can’t see each other I can tell the person how things land with me, ‘Oh I felt butterflies in my stomach when you said that.’ ‘Gosh, that feels heavy, how does it feel for you?’

Whilst my coaching work is now a mixture of working face to face, via skype and phone I stand firmly and confidently now as a reformed sceptic about the depth of connection that is possible without being in the same room and the high quality of work that can be achieved.

Doing phone based work was a skill I needed to develop. Adopting a more open mind to it has added considerably to my expertise. My tool box of skills has expanded and I don’t think twice now about offering to connect, individually and with groups, via the phone or Skype. As I reflect back on my clinical work I am left wondering how this new tool could have transformed by practice if I had been more open minded about its potential and prepared to experiment and give it a try.