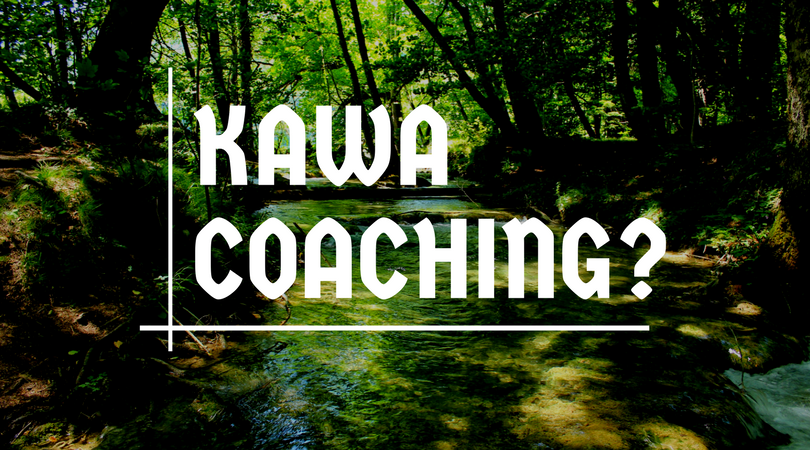 The integration of coaching within OT practice is often a key question asked by OTs when they start learning coaching skills.  There are numerous answers, ranging from taking a coach approach to your whole practice, using coaching tools on certain occasions, “coaching” someone for a specific part of their OT intervention, running groups based on a coaching approach or using coaching as part of OT supervision and I am sure there are many moreJ

I became acquainted with the KAWA model around 2006, around the time I started coaching. I was entranced by it and over the years have seen how coaching could be used with the KAWA model. I am not an expert on KAWA (sorry Michael), but love it as it uses the mighty power of metaphor, something I use all the time in my coaching and in my own personal development. So this is written more from my expertise in coaching (and it’s been rattling around my head for years, so I think it’s time to ponder on paper). I believe that a coach approach is probably taken by many OTs using the KAWA model, so my ponderings might not be knew to them.

I will simplify both coaching and the KAWA model for this experiment, as it’s just a starting point.  For those of you who don’t know the KAWA model well:

“The Kawa (Japanese for river) model uses a familiar metaphor of nature as an effective medium to translate subjective views of self, life, well-being and the meanings of occupations”  www.kawa.com

The aim of OT intervention is to enhance the river flow to enable meaningful occupation and engagement to take place. The river bed represents the environment – physical and social; the rocks “Iwa” represent life circumstances; the driftwood “Ruyboku” represent assets and liabilities; the water”mizu” is life force, flow, energy, chi; the spaces between the rocks, wood and river bed are “sukima” these gaps are small places where flow gets through – very importantJ The model illustrates “the complex dynamic that characterizes an Eastern perspective of harmony in life between self and context”. www.kawa.com

Let’s simplify coaching as well: Coaching is a discourse, a conversation, which moves someone from where they are now, to where they want to be.  Intuitive, powerful questions, alongside active listening are key to raising awareness and responsibility.  Coaching leads to “enlightenment (new knowledge, self-awareness, learning, insights) and transformation (re-creating self, achieving dreams/goals, moving towards something new, being and/or doing differently”.

If you are familiar with coaching, then I imagine, ideas are coming to you about KAWA and coaching could fit together very nicely. This was highlighted for me, when I opened “Co-active Coaching” a seminal text by Laura Whitworth et al.  She actually includes a diagram of a river with rocks (challenges) and talks about how much effort it would take to re-arrange the flow to avoid the obstacles in our life path. (p146 Client Process) In her diagram the rocks she labels include “money issues” “ anger” “intimacy” and “risk” – of course there are many more.

There is a commonality of language between coaching and KAWA: barriers, obstacles, flow, context, engagement, resources, values, attributes, character to name a few.  But, I’m pondering how a coach approach, could be used to enable a client map their river, identify rocks, driftwood, flow, spaces between obstacles and the river bed/walls.  I’m also wondering what it would be like if the client decides what the rocks, driftwood etc means to them?

What follows is a first stab (please note that!) at what sort of coaching questions I could ask, within the context of this model. The KAWA column next to it, is not a comparison. I think the questions I have listed would inform the existing Kawa process and could be used by an OTcoach who wants to use the KAWA Model. NB most of the coaching questions are usually followed by “and what else?” to expand responses.

As I started to write this, a million questions and further inquiries came flooding into my mind, so this is by no means exhaustive!

Language both divides and unites
Across the world of “coaching” and the world of KAWA, there is some commonality of language, which can provide a bridge between, and a means of standing in between the two, without getting too wet and caught up in the barriers that language can often bring!

Central to the Kawa model is the concept of Flow with the overall aim being finding ways of increasing the flow of water or life (Chi).  Reducing obstacles and restrictions, whatever they may be (Rocks (life circumstances), Driftwood (assets or liabilities), Silt or narrowed riverbed (environment) is the focus of OT intervention: The environment (river bed) may be adapted (equipment or adaptations); the social environment broadened and enhanced by community activities or social skills development; the Rocks eroded and Driftwood shifted by providing a combination of occupational engagement/activities, perhaps some psycho-education or group-work.

In coaching, we also work to reduce barriers and promote greater flow.  One of the key influencers in coaching development, was Tim Galway, a tennis coach, who developed the concept of the Inner Game.  This recognised that as well as the observable, physical game of Tennis, there was an Inner Game being played inside the player, often as challenging, if not more so, than the external game.  Galway talks about the need for us to “get out of our own way” and that we create the greatest barriers and obstacles ourselves by our thinking, imagination, beliefs, assumptions etc. We are our greatest barrier! Coaching doesn’t just tackle these inner processes, it does also tackle the hard “facts” (and I use that word very loosely) of a situation.

So both the Kawa model and Coaching both seek to reduce obstacles and increase flow in people lives – from the bridge, this can be clearly seen!

Something I have taken from Kawa across the bridge into my coaching, is a deeper understanding of “assets and liabilities” (Driftwood) and “personal strength’s” in coaching. Driftwood is not simply about strength’s, but I learnt that sometimes our main assets (our strengths being some of them), often exist as liabilities, at the same time.  In the Kawa model, one of the aims of OT is to move the Driftwood, to a helpful position where it promotes flow rather than causing a restriction by lying across the river.

In coaching, one of my biggest pieces of personal learning has been understanding of how my greatest strengths, creativity being one of them, can be either an asset or a liability: as an asset, my creativity helps me to generate unique ideas and see untold possibilities; as a liability, it causes overwhelm of ideas and lack of focus and extreme grumpiness if I am not able to create….In coaching, raising awareness of this and learning a “Skillful Use of Will” (Assagioli) to harness the asset and minimise the liabilities is often a key feature of a coaching conversation.

Having healthy water levels in your river also promotes personal resilience. Chris Johnstone, Doctor, Coach, Positive Psychologist and Sustainability and Resilience Guru spoke at our recent SIG and used the metaphor of river levels as an indication of personal resilience.  If you have higher water levels and greater flow, those rocks and driftwood are often underneath the water level. The water doesn’t need to twist and turn so much to negotiate them as it flows over them. When we hit difficult times, such as a significant illness, bereavement, redundancy etc, if we already have a river that flows well, it can be easier to cope.  So please, raise your own personal water levels…

As much as I would like to sit here for weeks and months and probably years, exploring this further, I need to leave for now and tend to my river…its Saturday morning, the kids need to go trampolining, decorating is in progress, lunch needs cooking… life flows on regardless. Jen