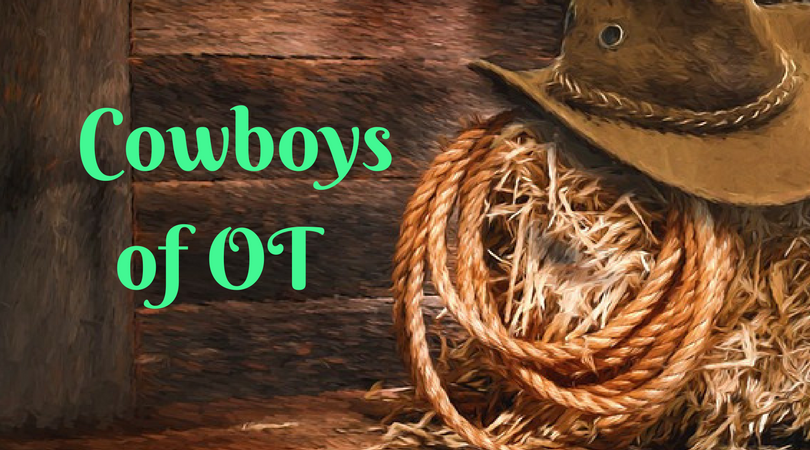 This short musing was inspired by Bob Garvey who wrote a paper on the “Cowboys of Coaching” a few years back and it prompted me to consider what might mean in relation to OT.

Having spent the last 10 years working, not only independently, but also in a “new” area of practice  and one that is not regulated (coaching), I often wonder if I might be considered a bit of a Cowboy…. Whilst I maintain my HCPC registration (worked hard to get it!) and I am a BAOT member, I often say things that are contentious, a bit whacky, I like to do my own thing ?  and quite frankly, I would like to see a massive transformation in our profession in many ways (actually, I think its already underway!).  So I understand why I could be perceived as a Cowboy or at the very least, perhaps why I perceive myself to be a bit of one.

Cowboys get a bad press generally. Gun totting and bar dwelling. Often rude, killing natives (Indians), uncontrollable – accountable to no one – unregulated!  Think of Cowboy Builders and other TV programmes which have used the term unfavorably….  And professionally, I have heard the term used in many ways.  Is this therapist/coach legit? Are they flaky? Are they qualified? Are they accredited? How do I know they are not a Cowboy?

However, we really need to take a fresh look at Cowboys.

Their primary function was to look after animals – making sure that the cattle are safe and healthy. They also helped the cattle get from A to B. This reminds me of our function as therapists and coaches.

Importantly for me, Cowboys worked at the frontiers – pushing out into new territories, finding fresh pastures.  They would travel ahead, taking personal risks and making sure that the new territory was safe and fruitful. There are no guarantees. This reminds me of the OTs who are blazing new trails, working in diverse and new areas. They have to leave the safety of the known OT territory – often there is no regular salary/pension!

To do diverse work, using “new” approaches or perhaps weaving together different approaches, or breaking the mould in some other way, requires great courage and we risk being isolated and often doubt our pathways – just like those frontiersmen. Many must wonder what on earth we are doing, why we doing it and where we doing it! But if we stick to the known path, the official line too rigidly, it ain’t gonna happen.

Some do this work quietly and others like me, are a bit loud (!) but we all have a desire to do the best for our clients and for me, for the profession as a whole – there is a whole lot of territory out there for OTs to move into, so let’s be more Cowboy eh? It doesn’t mean we are naughty, unreliable or dangerous ?