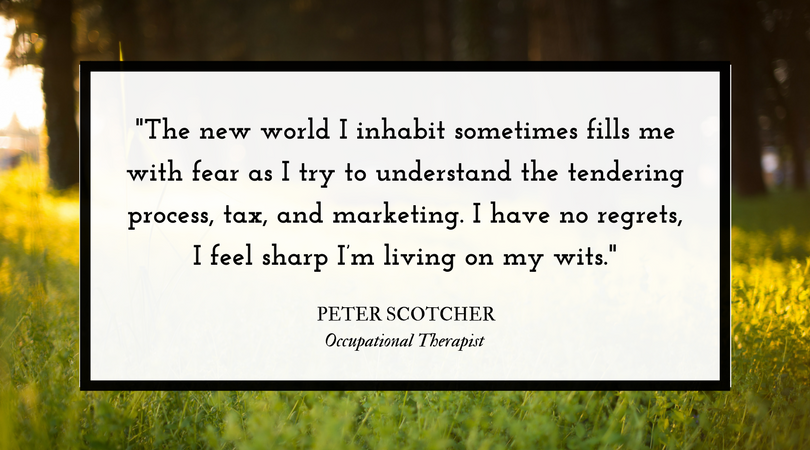 These words came spontaneously out of my mouth on Christmas Eve 2014 when I left the office of the mental health team for the last time. My career with the NHS began in 2003 when I started an Occupational Therapy (OT) degree at Sheffield Hallam University. Prior to that I had been a support worker for a private Brain Injury Rehab company and I always liked the idea of health care outside the NHS. I also had a feeling that “private practice” was the dark side, putting money before people.

In my post in the mental health team I heard myself complaining about the tension between care coordination and OT, I also had great difficulty discharging clients when I felt we were just getting started. I went to a conference at The British Association of Occupational Therapy in London and heard Jen Gash use plants as an analogy for developing ideas and providing the best conditions for growth. I also heard that the journey isn’t a straight line, but a meandering unpredictable path. I won a competition for an hour of coaching with Jen. This was a chance to fertilise and water the seedlings.

I discovered Wellness Recovery Action Planning (WRAP) at MIND in Bradford and started an evolution from mental health professional to peer facilitator. This new territory involved; self disclosure, accepting non-staff members as colleagues, working in a church hall and a nursery. I started to let go of taking referrals, assessing, and giving advice.

During this process I felt exposed and exhilarated. I saw group members exchange ideas and resources that I had never considered. I have powerful memories of saying very little in a group discussion about suicide, thinking “are these people giving each other dangerous ideas?”. The group expressed fears and experiences, and found hope in sharing thoughts, exploring ways to move on from desperate situations.

In October 2013 I incorporated “Brium”, a social enterprise with the mission to make peer support widely available. In the following year I co-facilitated WRAP groups funded by statutory bodies and a charity. I saved enough money to pay my bills for a few months and resigned from the NHS.

I now work full time for Brium, I am part of a growing network of accredited WRAP facilitators who provide inspiring peer group courses. Part of my support network is a coach from my previous employer, just when I think I don’t need her any more, something happens that I want to talk over.

The new world I inhabit sometimes fills me with fear as I try to understand the tendering process, tax, and marketing. I have no regrets, I feel sharp I’m living on my wits. I don’t know exactly how the coming months and years of my career will look. However, I have a chance to create, to work flexibly and to be a part of a growing movement of support being provided by peers. Surely this isn’t the dark side of health care!